What is the Cannabis Products Directive?

The Cannabis Products Directive – or CPD for short – is the proposed framework for CBD regulation in the EU. Drawn up by a UK trade association, it is not an official document but an idea of what CBD regulation should look like.

While the authorities work on the official new CBD regulations, to fill the void the trade association, the Cannabis Trades Association or CTA, has used existing regulation as a guide to make their own proposed rules.

The CPD offers an insight into what some in the industry believe should be included in the new CBD regulations. But if the proposal actually influences the new regulations here in the UK or EU is unclear.

Who should read this:

The CPD is not available to the general public. The CTA has not made the document or a summary of its contents public.

An outline of the contents has been released:

According to one industry source, the CPD was “developed in conjunction with the Food Standards Agency (FSA) and the Medicines and Healthcare products Regulatory Agency (MHRA).”

And that the European Food Safety Agency (EFSA) has “translated and submitted [the CPD] to all 28 member states of the EU”. 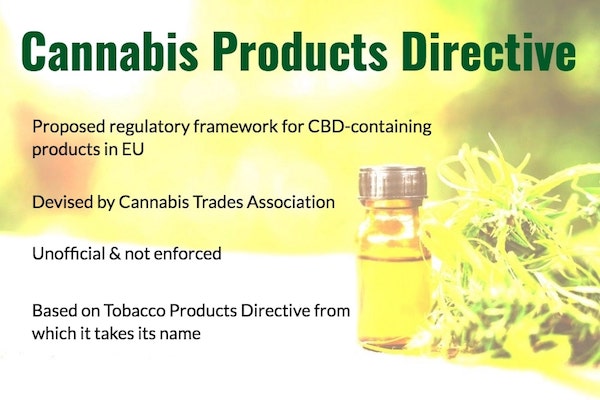 What are the chances of success for the CTA to influence new EU-wide legislation with their ‘Cannabis Products Directive’?

The CTA has proposed a new system of EU-wide regulation. But what is the likelihood it becomes reality? Here we explore some of the key factors.

What have the authorities said about the CPD?

Statements on the CPD from government are key because they legitimise the proposed framework. To our knowledge, the MHRA, FSA, or any other agency has not made a public statement on the framework.

In fact, it would be unusual for a government body to comment on regulations proposed by a trade association. If they do comment, in our experience, it would be in a way that would not legitimise – or make credible – the proposed rules so as to not mislead businesses and the public in any way.

A Directive applies to all EU Member States and requires all members to approve it, which takes a long time (5 years). A faster way to bring about new regulation could be to simply update national legislation.

This is possible because Member States already regulate the supply of cannabis and its extracts at the national level. In the UK, for example, the Misuse of Drugs Act regulates cannabis and extracts of cannabis, along with other controlled substances.

Rather than creating a brand new Directive on cannabis, national legislation could simply be modified. We saw this happen a few years ago when the The Misuse of Drugs Act was updated to pave the way for Sativex – the UK’s medical cannabis.

So national legislation could be updated to cover consumer CBD products and define, for example, when a product requires a medical licence.

While we believe a new Directive may not emerge, we do not rule out that a current EU directive, one that relates to cannabis, may be updated.

The UK is leaving the EU

Subject to a transitional agreement, the UK will leave the EU on 29th March 2019. With the UK out of the EU, we must factor in that the UK authorities will no longer be involved in EU law creation.

Clearly the UK need to be in the EU to have any chance of having a say on EU-wide law.  So the influence of a UK-based trade association on EU-wide cannabis law – or any other EU-wide law for that matter – is significantly limited with Brexit.

But all is not lost because the CPD framework may have more influence at home.

Manufacturers: Looking to get safety data sheets for your products? Try our cannabidiol MSDS service today.

If a Cannabis Products Directive does develop

If a Cannabis Products Directive or other EU-wide regulations emerge then what would it look like? In our experience, the following key elements are likely to be a part of new cannabis product laws:

Verifying the CBD content in products on the market may eventually be part of the new rules whether the CPD materialises or not. We understand that CBD mislabelling could be a real issue in the UK as it was in the US.

When would a new Cannabis Product Directive come into effect?

A new Cannabis Product Directive would not take effect for some time. If the TPD is anything to go by, it would take 5 + years for legislation to drawn up, agreed upon by all EU Member States and go through all legislative processes prior to publishing.

Then, there is the implementation and transitional period (about 2 years). So we may not see a Cannabis Product Directive until 2023. But new laws could be introduced at the national level before then.